Only 10 days left before departure! Since Australia is so huge, it is a good idea to prepare a roadmap first before heading off!

Indeed, having an approximate idea of where and when you want to go if you wish to arrive in time without getting lost ... because if it happens (which might probably arrive a few times), it's not minutes that we will loose, but hours!

This roadmap allows us to have a concrete idea of where we are heading to in a chronological order. But even though this map seems to be quite secured, there is still enough room there for improvisation, adventure and last minute explorations.
If you want to know where we are, have a look to the right column of this page, we will update the map there as we go with our current location. That way it will be easier for you to track us whereever we are along the way.

Departing from Sydney on April 15th, we plan to visit all major places and highlights of Australia as Uluru, the great barrier rife or the famous Kakadu national park in the Northern territories. 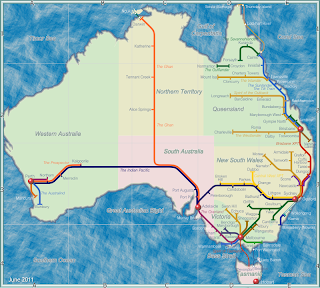 Our means of transport will be the train. Since distances here are such a big deal, the train appears to be not the quickest but the cheapest and fun way of moving around. Major train tracks connect all the big cities in Australia and for foreigners, there are train passes that allow you to travel as much as you like all over the network for a very competitive price.
Have a look at the map below representing the major train tracks in Australia.
From the map above, you might have noticed that you can't really go "everywhere" with the train. Indeed, most the country is covered in deserts and tropical forest regions... but mainly deserts. In these areas, even roads are rare and tracks for 4wd cars are the only way to go.
To stay flexible and reach out to some of our destinations, we will be renting cards to drive around Tasmania, explore the south of Perth and connect Darwin to Cairns.
Who says backpacker says walks or hikes. And when there is hike there are legs! During this trip, we are planning to do several hikes all around the place. Basically, if we are not sitting in the train or driving, we will be walking. Also, if the weather still allows it, we plan to hike the 250km of the great north walk from Newcastle to Sydney as the last part of our three-month adventure. (Note: some guy just broke the record and did that walk in 54 hours ...)

That's it for now! 10 days left - Stay tuned for more in the coming days!
Posted by Unknown