This is the first day of the trip! We left our flat early in the morning around 7am and headed one last time to Adeline's job to leave one excess bag there. Even after so many years of traveling, it s surprising how fast things get heavy ones you have to carry them. After a quick coffee there and a last goodbye to Frank (Adeline's employer) we took the direction of Sydney Central station to grab our first train to the south We arrived in a little town called Gerringong around lunch time.  About 3km out of town, we start to see the start of what is called the "seven mile beach". This beach which is seven miles long (something like 15km) and as easy as it seemed to be, we chose to hike down that beach with our backpacks. The more we were walking down the beach, the more clouds gathered in the sky forseeing something tat would change a nice beach walk into a not so nice one. After 6km, we found a parking space not so far from the beach where we chose to plant our first camp. Of course, camping insn't allowed as in most places along the NSW east-coast, but that place hadd toilets, gaz BBQs and so it became our home for a night. In the late evening, some german road tripers (4wd) came to stop on that spot too and we shared some drinks and talks with them for a few hours until the storm kicked it. Nothing too bad, but it was time to go to bed anyway, so we called in a night and headed back to our tent. 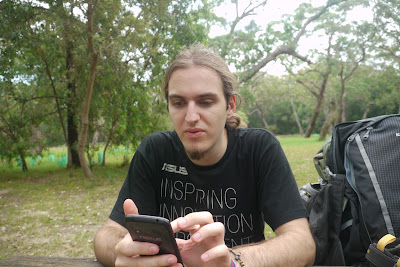 After a quite exiting night trying to sleep under storm and rain, we woke up with some bad weather left over's. Using the gaz BBQ's to boil water, we prepared ourselves a nice breakfast with rice and a cup of tea. By 10am, we were back on the road and just about and hour after the departure, the rain started again. We suited up with our panchos, and continued to head down south through the forest and the beach. Finally after an other hour of walk, we notice a passage through the forest and leave the beach to enter the coastal down at the end of the beach. There we took a break to dry our cloths and rest. Once dried, we walked to the nearest bus stop to reach Bomaderry. At that stop, we met Merry and her grand-son. Since the bus wasn't arriving before an hour, we joined Merry for a cup of coffee. We decided to spend the night in Bomaderry before taking the train on the next morning back to Wollongong. While waiting that the sun goes down to set camp, we went shopping at the local supermarket and watched the local football team train on the oval.

Early in the morning we jump back on the train to Wollongong. Once in town, we went down to the Information Office to find-out more about the things to see in down. We decided to give a quick look at the local art gallery as an excuse to leave our bags at the cloak lockers and headed to the coast to check out the light-tower. One of the most famous attraction in town is the Nan Tien Temple which is located two train stations down south of Wollongong in the city of Unanderra. After a year in Asia, this is nothing new to us as temples in Taiwan can be found nearly everywhere, bit still ... this is supposedly the largest Buddhist temple of the southern hemisphere. For the night, we stay in Unanderra before embarking on the train to Canberra, Australia's capital city. 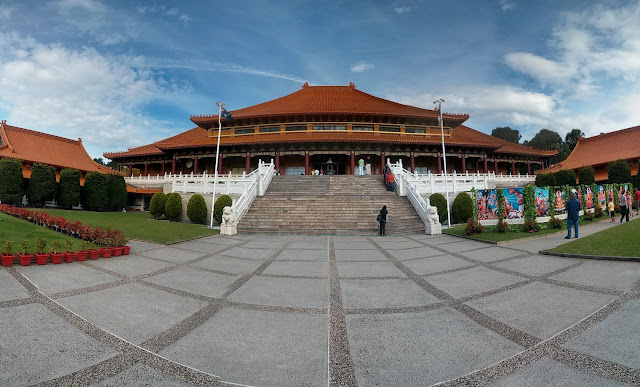 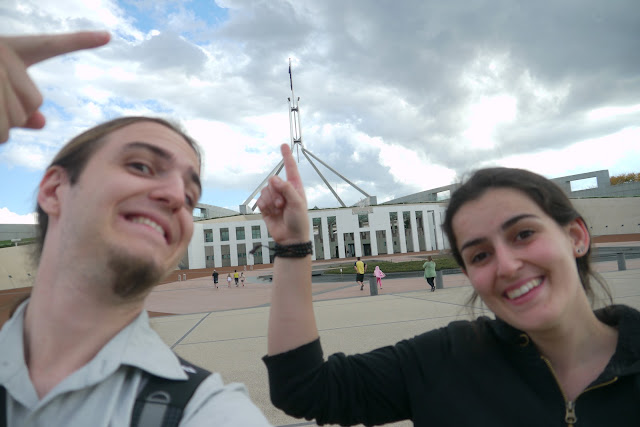 It takes about 5 hours of train to reach Canberra. Australia's capital city is really in the middle of nowhere somewhere in between Melbourne and Sydney (since they couldn't made up their minds). We can already feel that here the climate is really different and quite influenced by the nearby snowy mountains. We spend out first afternoon in town visiting the old parliament hours and the new one build right behind this first one. Here all the building are huge and the there is no street narrower than 30m. Yes! Here they have space! It is also stricking to see that this city is a town designed in the modern era. How space is used, streets are design and things are positioned indicates how much efforts have been placed into designing the best urban city design as possible. Australians tax money well used I'd say! In the evening, we went back to the trains station (since we left our bags there) and prepared for a cold night - our first night below 5 degrees.

Camp Site: Some abandoned field not far away from the train station 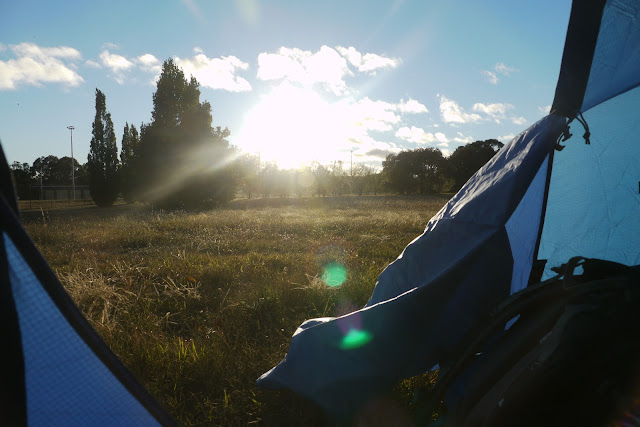 With about 5 degrees in the early morning, we can say tha this is a change. Timothee had not experience such a cold since Sweden (last summer) and quite enjoyed it. The good thing about a cold night is that for once the tent is dry (no condensation) and we don't have to wait an hour to dry it before packing it. And the sun is shining! This morning, we took a nice coffee while surfing the web and starting to write up this post. Then we headed back in town to visit the national art gallerie, the Australia court of justice and the national library. Other examples of tax money well spent! HUGE We decided to take the advantage of this well equipped library to finish writting up this post before heading towards the war memorial on the other side of town and tonight taking the train to Melbourne via Gouldburn.

For the se 5 first days on the road, our impression so far is quite good. The weather hadn't been great all the way, but still not too bad. We give these day a mark of 4 out of 5.

Finding a camp site is our every day challenge. Finding a palce where we can plant our tent that is not too exposed, hidden, soft ... perfect. For now we can say that we've been quite lucky with this. Australia is full of empty spots!

They definitely are worth to check out. We've been on the coast with it's nice beach areas and costal like landscapes like you could see in Europe. And in land, the view pretty much looks like what we can see in mountains in Europe (France/Switzerland or Germany with a little Scottish tone to it). And cows ... lots of them!

The more you go out of town, out of Sydney, the more you meet the "true" Australians. Those from the bush! These people still have in the accent, behaviours and habbits those of the early Australia pioneers. It's a bit weird, but all were really friendly and welcoming.