Cairns and around - Part1

For this last part of the trip, we took the plane from Darwin towards the last state that remains on our travel plan: Queensland. As written on the cars, Queensland is the "Sunshine state". We plan to stay two weeks in Cairns since there are quite a few things around here, this is the first part!

Arriving with the plain is cairns is probably one of the best things to do. As it arrives, it flies over a section of the great barrier reef allowing everyone on board to have a good look at the beautiful blue colors from the reef and the mountains in the far back surrounding the city of Cairns.
Arrived at the airport, a friend of mine (an Overclocker) comes to pick us up. Steve shows us quickly the main places in town and the few attraction to not miss out. After that we head to his place to have lunch together.
After lunch, we took a moment with Steve to go through a local map and tick the major attractions that we should be visiting later that week when we'll have a car. Most of the things to see are waterfalls all around the table lands, gorges and of course beaches. 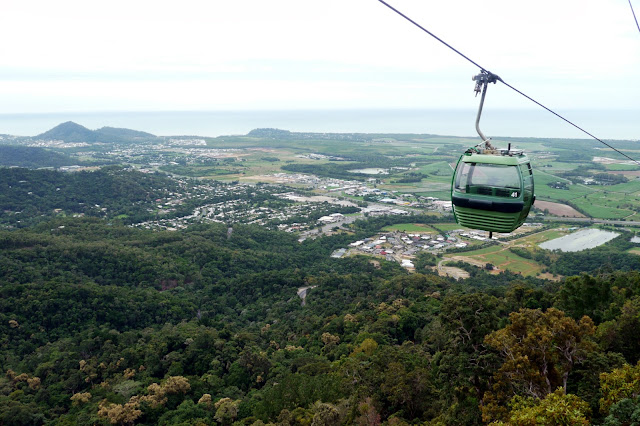 
Two days after our arrival, we headed to the town of Kuranda, This small town is located somewhere in the middle of the rain forest on one of the mountains near Cairns. To get there, we decided to take the Skyrail gondolas and return with a small train that slowly goes down the mountain slopes all the way to Cairns.
The Gondolas journey is 7.5 km long and reminded us a lot of the one in Taipei. 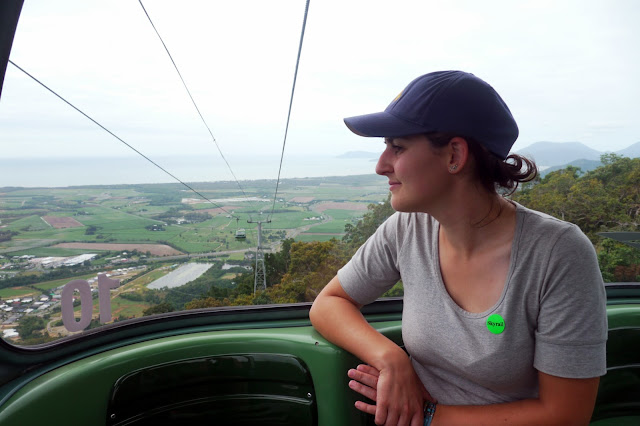 On the way, we did two stops. At both stops short walks brought us to beautiful lookouts over the rain-forest. The most impressive ones was definitely the one of the "Barron Falls" (picture below) 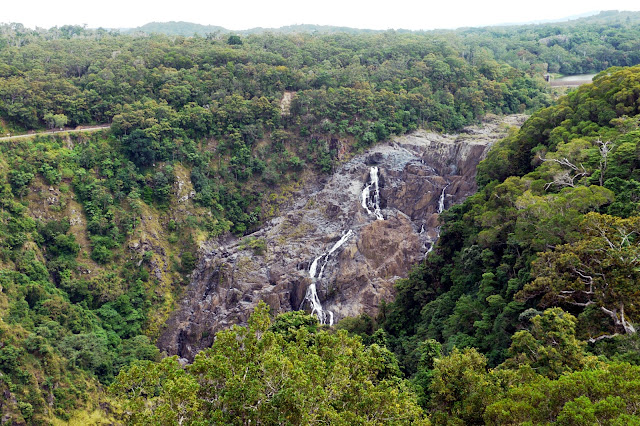 On the way back we took the train. The train tracks are quite old (build in 1880) and it takes about 1h30 to drive it down the 30 km rail track back to Cairns. On the way, 15 tunnels, 37 bridges and breath taking views. 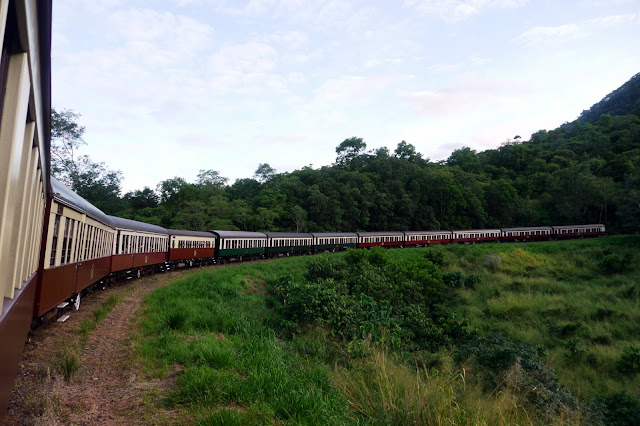 It would not have been possible to visit Cairns without going to see, swim and dive on the reef. This reef is the longest in the world and its 2600km length spread over 344,000 km2 can be spotted from space.
It takes about 2h30 by boat from Cairns to reach the outer reef (where it is the most beautiful). There, we got rigged up with snorkelling gear and went out to explore the reef life. Later during the day, I also did some diving in order to reach about 5-6m depths on the reef - that's where the big fishes are. Sadly, no sharks ... 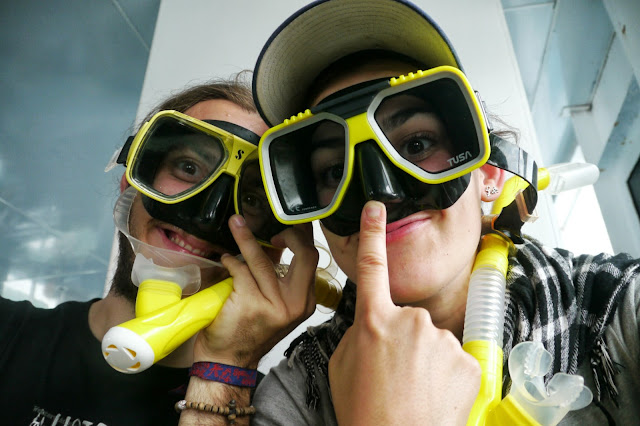 In the water, it took Adeline only a few minutes to get used to snorkelling and breathing through the tube. After that it is just like you've seen on TV. Beautiful fishes swimming everywhere, lots of colors and many many different corals everywhere.
We even saw some of the big clamps that move when you touch them.... magic!

Sadly, I've sold the GoPro camera in Sydney, so no under water pictures of this. But believe us, it's like on TV and feels like in a swimming pool. 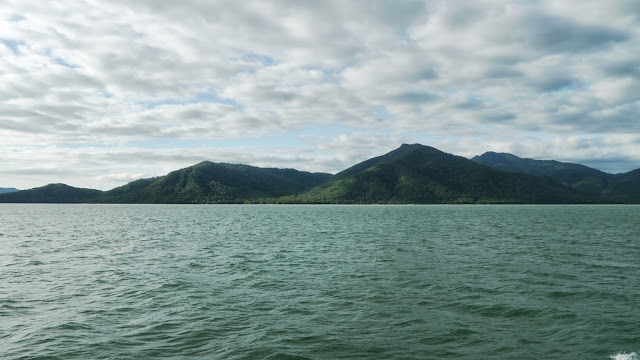 
During this first week, Steve wanted to show his mother in law the shack that he had bought with some friends of a fishing club. The place is located on the Daintree river, about an hour north of Cairns.
Once a arrived there, we were supposed to pick-up a small boat on a trailer and drive a little further to the closest launch bay. Unfortunately, Steve had forgotten the bowl that is necessary to hook up the trailer to his car. So we simply launched the boat from the pick-up location and decided to go down the 10km of river between us and the shack.

The motor on this boat din't wanted to start initially, and it took us about 30 minutes to get it to start ... 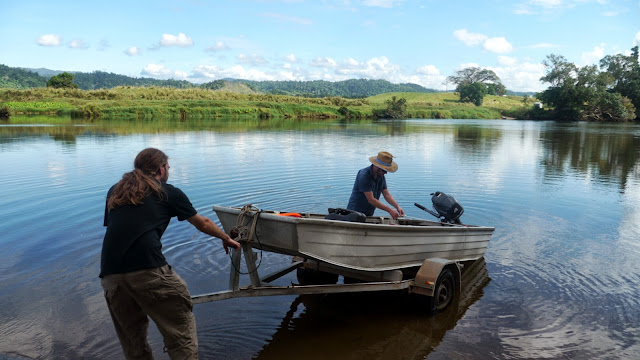 After a few minutes out, we start to see a few crocodiles. They are far away and busy getting a tan in the sun. These are salt water crocodiles ... the biggest you can find and the most ferocious. We keep going - it is better to not make any stops since our motor might not be able to start again ... who knows!

After 1h30 of slow ride, we arrive at the shack. It is quite a big house build of wood which the climate, termites and time have taken care of - but still, a great place. Steve and his friends plan on replacing what needs to be replaced and restore the shack to become a great weekend destination for family and friends. 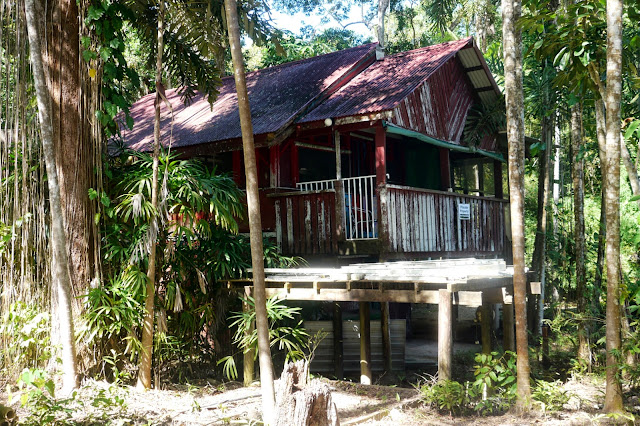 We don't stay long, it is already time to go back.

But again, the motor doesn't want to start. 20 minutes later we are on our way back, but after only half-way through, the motor stops and now completely refuses to start. Our little boat is now slowly drifting in the middle of the river with potentially hungry crocs swimming around.

A few minutes only later, a tourist boat passes by and gives us a ride back to the nearest pontoon.  There we  arrange things, bring back the boat and then drive back to Cairns. What a day - what an adventure, thanks Steve! 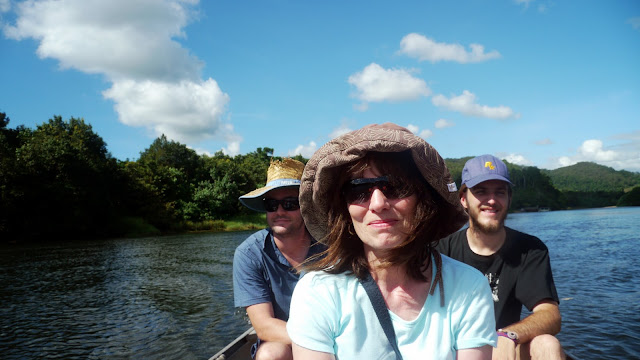