With the car, it will be easier to freely go around. Back in Australia we traveled mainly with trains and bus. However in New-Zealand the rails and bus are limited in where they can go. As the camping places are often limited as well, the car is a necessity to be able to go to those spots.

For the first kilometers, we go to the supermarket - Pack'N Save. New Zealand owned, this supermarket offer the best prices. As we will be cooking for most of our meals, we grab some canned food, veggies and fruits as well as some bread and what we need for breakfast. From Taiwan we already got some spices, curry, couscous, rice and tea.We store all of it in a box in the trunk of the car. Even if the Mini is a bit small, with a bit of organization we succeed in storing the food and clothes. 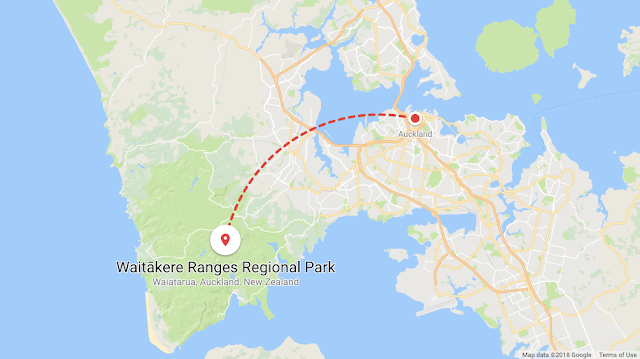 From our plan, our first stop after Auckland City is the Waitakere Ranges Regional Park. However, after we visited the tourism office (called i-site in NZ), they advised to not go there due to the Kauri dieback.  Soon, the government is planning on closing that national park to limit the spread mainly carried by our foot and animals. The Kauri tree is the most emblematic tree from New-Zealand, well known for being strong, regular and its esthetic. Already, after the human exploitation, only 4% is left, mainly located in the North part of the North island of New-Zealand.


So we decide to drive to the Piha beach located 40 kilometers from Auckland on the West Coast. We need a good hour to drive there, and soon enough we understand better why the road in New-Zealand are different and why we do need extra care while driving. The roads are quite narrow in place, winding and turning a lot BUT they are in good shape.


Piha Beach is well known by surfers. Quite a lot of backpackers are doing the surfer road trip, going from one beach to the others. Piha is one of the best because of its waves.


The beach is cut in half by the Lion rock. This geological formation is a 16-millions year old eroded volcanic neck. The sand of the beach is black due to the iron of past volcanic activity.


Next, we go to the Kitekite Falls located two kilometers from the Piha beach. We do a one hour hike to get to the 40m falls. We take some relax time to look at the falls and to look at the courageous people going into the cold water.